We were asked to design a single dwelling in the open countryside of the Lenches in Warwickshire, replacing an existing industrial unit. The planning context for new dwellings on rural sites such as this is complex and it is only on one condition that these are ever approved – the design needs to be of ‘outstanding, or innovative, architectural merit’. Obviously, this was an exciting brief, but a challenging task.

Our design started with an ambition to avoid suggesting ‘gimmicky’ architectural solutions for the sake of being innovative. We wanted our design, and the narratives informing the design, to justify the notion of outstanding and to set an example as to how buildings can relate to its setting and existing context in a contemporary way, through subtle analysis and careful attention to material decisions and detailing.

We therefore set out to learn and gather inspiration from the immediate agricultural landscape and its spatial arrangement of built volumes. Typically, the traditional farm dwelling is arranged into a sequence of spaces/volumes such as the farmhouse, barns, the yard, walled/productive garden & other outbuildings or structures. Studying materials and layouts of existing rural and agricultural buildings drove the architectural concept for The Orchard House. The site is in a stunning location, surrounded by orchards, bluebell meadows and barley fields, with great views out to the wider landscape, and what became important to us was the siting of the new dwelling within this landscape.

So as opposed to placing a new single volume house within the landscape, surrounding it with a garden and creating an ambiguous boundary between garden and landscape, we divided the programme of the house into volumes, much like the traditional farm consisting of a series of volumes. The volumes containing the various functions of the house were rotated to align with the strong axial lines defined by the rows of orchard trees and placed in the landscape to define pockets of garden between them and linked as a continuous perimeter wall, creating contained domestic courtyards of various sizes and intimacies. We then suggested that the wider landscape of orchards and wildflower meadows would be allowed to grow all the way up to the perimeter walls of the house defining a clear boundary between domestic and agricultural worlds. 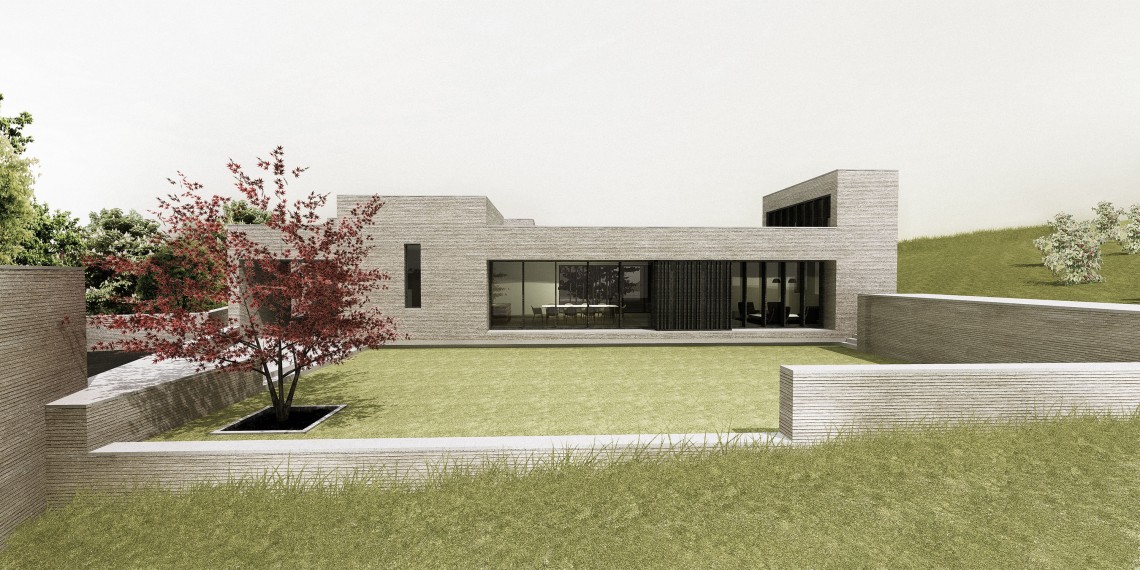 The layout of the building is a response to the orientation of the site. The entrance yard, garage/utility, and the bedrooms face north with the study and master bedroom supervising the entrance from the upper level. The main living spaces face south where deep terrace recesses provide solar shading in the summer. To the south-west some existing vegetation is cleared to create a shelterbelt of vegetation, which, combined with the water pond located on axis with the prevailing wind, aim to strike a balance between natural cooling, shading, protection and privacy, whilst still offering views out and allowing solar gains in the winter. 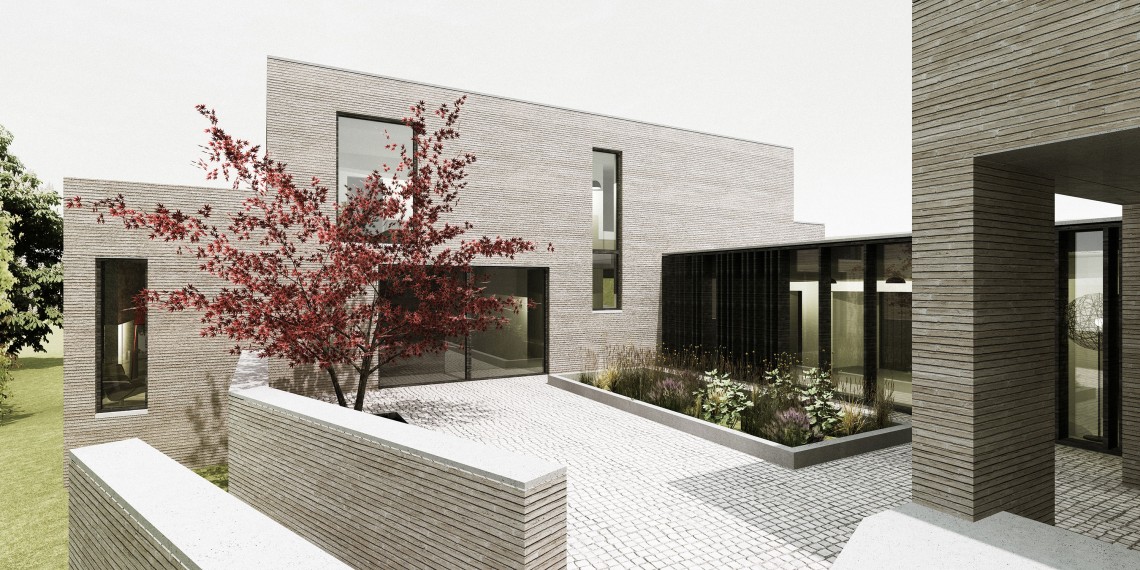 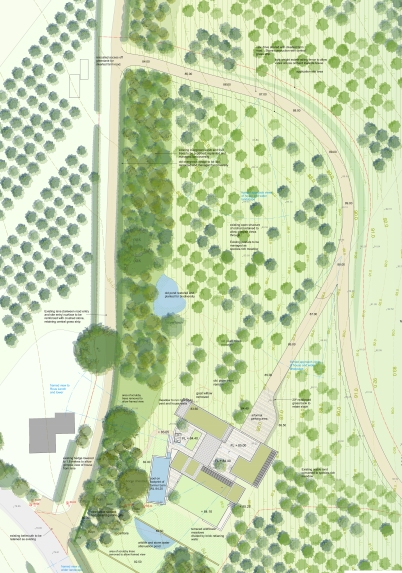 In re-routing the existing farm access track to the north, the remainder of the site to the south can become a private wildflower meadow, merging into the neighbouring bluebell field. The new access is also proposed to emphasise the theatricality of arrival as one passes the house on ‘the plinth’ at low level and comes around and through the orchards before arriving into the entrance courtyard through the perimeter wall.

The layout of the Orchard house, stepping down the hill, builds on this theatricality and encourages movement through the house. Blossoming trees will be strategically planted, views out to courtyards and the landscape beyond are deliberately framed, and the compression and release in moving from one volume to the other, lead you through the house and aims to blur the boundary between the inside and the outside. 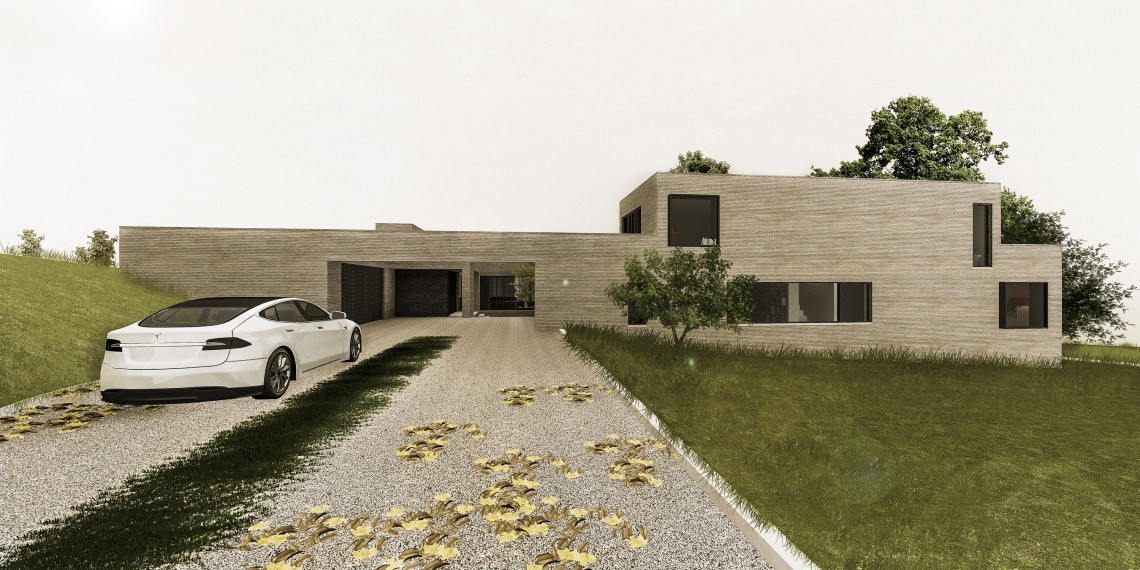 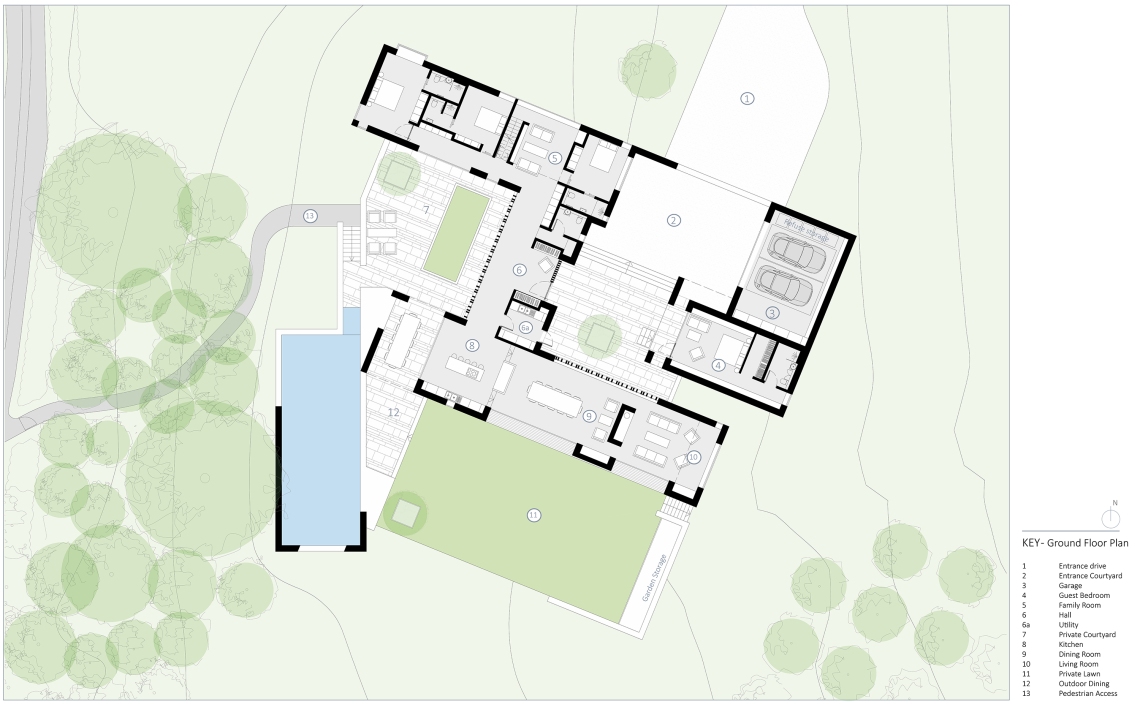 Justifying the subjective qualities of design to merit ‘outstanding architecture’ typically requires wider peer support and we presented and developed the scheme through consultation with MADE in Birmingham. We had very strong support for our proposed design from them but still did not manage to convince the planners to gain approval. We remain of the opinion that the highest standard in architecture should come from a careful interpretation of the site and a contemporary response that celebrates its context through its architectural narrative.